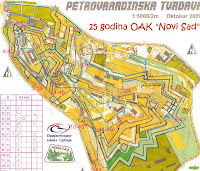 Last weekend the race was held in Novi Sad on beautifull and chalenge fortress. It was a little anniversary, the first 25 years of OAK "Novi Sad" and Frulja's 50th birthday, team mate of that club.
Every race on that fortress is very exciting. There are a lot of passages, walls, levels, paths and if you don't know spatial arrangement you are in trouble.
I started race very well untill the 6th control, when I missed one passage and made mistake of 2.30 minutes. After that, on the 8th control I passed on the wrong side of the wall and lost some 30 more seconds. On the 10th control I chose a variant from the right side and lost about 20sec., even though I thought that the left variant was better. Till the end of the race I had a quite safe race. At the end I was the first with 30 seconds ahead of the second competitor. It was a good control race after the first cycle of preparation period with more than 700km in a month.
After all I was satisfied with running however I must do something with my self confidence during the race and selection of variants.
Објавио BLAŽO у 11:23